Leaving Your Family for the Love of Christ 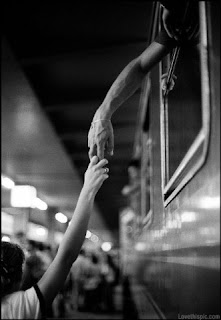 I'd like to write to you about leaving family to follow Jesus, as He taught us to do. This is a very important topic, since the love that many people have for their families may keep them from obeying the Lord.

At another time, Jesus said, "Truly I say to you, there is no one who has left house or brothers or sisters or mother or father or children or farms, for My sake and for the gospel's sake, but that he will receive a hundred times as much now in the present age, houses and brothers and sisters and mothers and children and farms, along with persecutions; and in the age to come, eternal life." (Mar 10:29-30).

First of all, Jesus led by example, and did not ask us to do anything that He was not willing to do Himself. He left the glory He had with His heavenly Father to come to this dark world (Jn 17:5; Phil 2:5-11). He also left His earthly family to follow the call of God. His own brothers did not believe in Him (Jn 7:5). As He was preaching in a home one day, He was told that His mother and brothers were waiting outside and wanting to see Him. His family thought He was out of His mind, so they planned to take Him under their control (Mk 3:21). But answering them, "He said, 'Who are My mother and My brothers?' Looking about at those who were sitting around Him, He said, 'Behold My mother and My brothers! For whoever does the will of God, he is My brother and sister and mother.'" (Mar 3:33-35).

When God tells you to do something, then you need to do it, even if it means leaving your family. I had to do this when my parents were very old. When I told my father that I was going overseas as a missionary, he said that he would probably be dead by the time I came back. I loved him and my mother, and it was heart breaking to leave them, but I loved the Lord more, and I knew He was calling me to take my wife and little children overseas to serve Him in Eastern Europe; so I had to obey the Lord despite the love I had for them and the sorrow I felt, as well as the heartache it caused them. The same was true of my brother and sisters. My brother had tears in his eyes as he bid me farewell at the airport, but there was no turning back.

My wife and I, along with our four children, did go overseas to Eastern Europe. We didn't know when we would ever be coming back, and we were prepared to serve Him there for the rest of our lives, if that's what the Lord wanted. Less than three months after we arrived in Hungary, my father died. Then just seven months after that, my mother died. Before we had been in Hungary less than a year, both my parents had died. But despite the pain of those losses, the Lord was worth it. We continued on with the ministry the Lord had given us to do.

Closing Words
The Lord may be calling you to go overseas and serve Him on the mission field, but you are grappling with the difficult decision of whether to leave your family. If you know the Lord is definitely calling you to do that, and you have received confirmations of that, then you need to follow Him and obey the call.

There may be others of you that the Lord is not calling to serve Him overseas, but He is calling you to separate yourself from your family in some other way. For some of you, there may be something the Lord is telling you to do, but your family won't support you in it or give you their blessing, or be present for it. For others, there may be some area where you simply cannot join in with them with a clear conscience, and the Lord is telling you to come out from among them and be separate. He is calling you to stop compromising. You need to obey Him. Love Him even more than your family. Don't let anything stop you from fully obeying the Lord. I trust this has helped to encourage you to do that today.

Author's note:  If you enjoyed this post, you may also like The Cost of Discipleship, Is Obedience Optional?, The Obedience of Faith, Following in His Steps, Pleasing the Lord, Living a Life Worthy of the Lord, and the other posts available through the links on the Home page. You may also access my complete blog directory at Writing for the Master.


Len Lacroix is the founder of Doulos Missions International.  He was based in Eastern Europe for four years, making disciples, as well as helping leaders to be more effective at making disciples who multiply, developing leaders who multiply, with the ultimate goal of planting churches that multiply. His ministry is now based in the United States with the same goal of helping fulfill the Great Commission. www.dmiworld.org.
Posted by Len at 8:57 PM