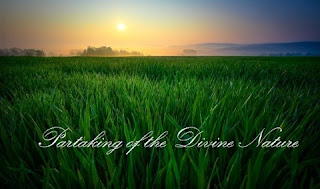 In Part I of this article, Partaking of the Divine Nature, I explained how we as disciples may participate in God's nature by possessing godly qualities and bearing good fruit for His glory. In this second part of that article, please let me show how our participation in the divine nature enables us to also operate in the supernatural power of the Holy Spirit.

Peter said, “For by these He has granted to us His precious and magnificent promises, so that by them you may become partakers of the divine nature, having escaped the corruption that is in the world by lust.” (2Pe 1:4).

Becoming partakers of the divine nature not only refers to sharing in God's qualities and characteristics, but also in His mighty deeds. The only way that is possible is through the power of the Holy Spirit, since we ourselves are not God, nor are we little gods. As I have already explained in my article, Supernatural Power for All Disciples, God has promised to baptize His children with His Holy Spirit, and those who have received that promised gift may operate in the same supernatural power that Jesus did. If you haven't read that article, I recommend you do so, because in it I prove and explain it from Scripture.

However, here are some more Scriptures that teach this same thing. Jesus said:

"Truly, truly, I say to you, he who believes in Me, the works that I do, he will do also; and greater works than these he will do; because I go to the Father. Whatever you ask in My name, that will I do, so that the Father may be glorified in the Son. If you ask Me anything in My name, I will do it." (Joh 14:12-14)

Notice He made this promise to him who believes in Jesus, so it's based on personal faith in Christ. He promised that the one who believes would not only do the same works that Jesus did, but do even greater works than He did. That's pretty amazing, and He followed that up by essentially repeating Himself twice for emphasis, by saying that He would do "whatever" we ask in His name and that He would do "anything" we ask in His name. He used these two words "whatever" and "anything" to emphasize the lack of restriction on what is possible. Contrary to what some may think, this does not bring glory to the one asking but to the One whom we ask and to the One whose name we ask in.

Incidentally, as I taught in my article By the Spirit of God Alone, during His earthly ministry the Lord did all of his miracles and healing by the anointing of the Holy Spirit, leading by example and showing us how we are to do the same. He chose to empty Himself of the divine glory and power He had with the Father before He came to earth (Phil 2:6-7), so He had to operate supernaturally by the power of the Holy Spirit after the Spirit descended upon Him at His baptism (Matthew 3:16; Mark 1:10; Luke 3:22; John 1:32). Likewise, we are supposed to follow in His steps (1 Pe 2:21).

He said that all things are possible for believers. "And Jesus said to him, 'If You can? All things are possible to him who believes." (Mk 9:23). He was repeating back the same words that had just been spoken to Him by a father whose son suffered from seizures. That man had prefaced his request for the Lord's help with the words, "If You can..." and the Lord was assuring him that not only was it possible for Him to deliver his son from seizures, but that all things were possible by faith in Him.

This is what I want to emphasize today. When you put your faith in Christ, and you ask God in prayer, you can do all things. As Paul said, "I can do all things through Him who gives me strength." (Phil 4:13, NIV). All things includes everything. Our only limitation is the will of God, so as long as we are not violating the will of God, as long as we are not working iniquity (i.e., sinning), then we are free to do anything without restriction. Paul said, "Where the Spirit of the Lord is there is freedom." (2 Cor 3:17b, NIV).

When you are in Christ, operating in the Spirit by faith, you can forget about all the limitations that normally govern life on earth as we know it. There are no barriers of time and space at that moment. We are not limited by anything whatsoever, so if God is willing He can even suspend gravity, as He did when Christ walked on water. I have read a testimony of a man of God working in Asia who was carrying the gospel to remote places, and the Lord enabled him to walk on water across a river to reach his target audience.

I have also read about a man who was praying in his bedroom for people in a far away country, and if my memory serves me correctly, when he finished, he had mud on his shoes as if he had actually gone to that place in the spirit. I know of another man who traveled to another country in prayer, who actually saw the geography beneath him as he flew there, and then he entered into the room of the sick pastor that he was praying for in that other country. That pastor had just called him two days earlier saying he had to retire from ministry because of a heart condition. After he laid hands on that sleeping man and prayed for him, he then laid hands on the man's wife who was sleeping beside him, and prayed for a renewal of her relationship with God. He called the pastor a couple days later and asked how his heart was doing. The man said that a strange thing had occurred a couple nights prior to that in the middle of the night, when he had a supernatural encounter with God, and the pain in his chest left him. Likewise, since that night his wife was now experiencing a fresh baptism with the Holy Spirit and was speaking in tongues again as she had in the past. In fact, the pastor told him it had been two days since she had spoken in her native language. All things are possible with God for him who believes.

The Scriptures give an account of Phillip being translated in the Spirit immediately after he baptized the Ethiopian eunuch. "When they came up out of the water, the Spirit of the Lord suddenly took Philip away, and the eunuch did not see him again, but went on his way rejoicing. Philip, however, appeared at Azotus and traveled about, preaching the gospel in all the towns until he reached Caesarea." (Ac 8:39-40, NIV). Why should we think it incredible that God could still translate people today. I have heard more than one such testimony of someone being translated in the Spirit in our modern day just as God did in the days of old in the Bible. Jesus is the same yesterday, today, and forever (He 13:8).

The apostle Paul wrote to the Corinthian church, "So when you are assembled and I am with you in spirit, and the power of our Lord Jesus is present, hand this man over to Satan for the destruction of the flesh, so that his spirit may be saved on the day of the Lord." (1 Cor 5:4-5, NIV). How could Paul be with the Corinthian church in spirit during their assembly unless he was enabled by the Holy Spirit to do so? In fact, Paul did join them in spirit during that service through prayer. In that way, he participated with them in handing that man over to satan and putting him our of the church.

Don't forget that God is able "to do immeasurably more than all we ask or imagine, according to his power that is at work within us." (Eph 3:20, NIV). God can do far more than you can ask or imagine. He'll go beyond your wildest dreams.

Closing Words
Through this study on how our participation in the divine nature enables us to also operate in the supernatural power of the Holy Spirit, I trust that your faith has been stirred, so that you may take God at His Word, believe Him, realize that He has removed all restrictions on what you can ask for, as long as they are within His divine will, and expect greater things from Him in prayer. I trust that you will have a renewed experience with Him, and that your prayer life would be revived. May these truths make you eager to go to the Lord in prayer, and enable you to step out by faith in supernatural ways that you have never before experienced or even thought possible. As you do so in the will of God, by faith in the name of Jesus, may you experience freedom in the Spirit, and see God do more than you ever dreamed or imagined. "May the Lord give you the desire of your heart and make all your plans succeed. May we shout for joy over your victory and lift up our banners in the name of our God. May the Lord grant all your requests." (Ps 20:4-5, NIV).

Author's note:  If you enjoyed this post, you may also like Bearing Fruit in Every Good Work, Partaking of the Divine Nature -- Part II, By the Spirit of God Alone, Supernatural Power for All Disciples, Baptized with the Spirit, Gifts and Fruit of the Spirit: What's the Difference, Following in His Steps, Are We Really Little gods?, and the other posts available through the links on the Home page.  You may also access my complete blog directory at "Writing for the Master."


Do You Want to Know Him?
If you want to know Jesus, you can. It all begins when you repent and believe in Him.  Do you know what God's Word, the Bible says?


Len Lacroix is the founder of Doulos Missions International.  He was based in Eastern Europe for four years, making disciples, as well as helping leaders to be more effective at making disciples who multiply, developing leaders who multiply, with the ultimate goal of planting churches that multiply. His ministry is now based in the United States with the same goal of helping fulfill the Great Commission. www.dmiworld.org.
Posted by Len at 9:18 PM