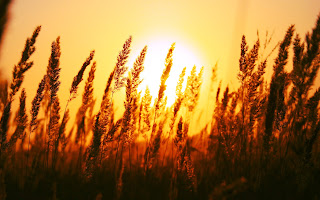 I realize that a vast number of Christians today think the Sabbath has been repealed in the New Testament.  Here are some Scriptures about the Sabbath that I read this morning:

Lord of the Sabbath
Let's start with the basics. The fourth commandment says: "Remember the sabbath day, to keep it holy. "Six days you shall labor and do all your work, but the seventh day is a sabbath of the LORD your God; in it you shall not do any work, you or your son or your daughter, your male or your female servant or your cattle or your sojourner who stays with you. For in six days the LORD made the heavens and the earth, the sea and all that is in them, and rested on the seventh day; therefore the LORD blessed the sabbath day and made it holy." (Exo 20:8-11)

So what about the New Testament.  Jesus said to them, "The Sabbath was made for man...” (Mar 2:27).  In saying this, He did not repeal it, but affirmed the need for the Sabbath.  In fact, he declared, "So the Son of Man is Lord even of the Sabbath." (Mar 2:28).  While Jesus taught that certain emergency situations may be necessary on a rare occasion on a Sabbath, and he taught that it is lawful to do good and to save life on the Sabbath, he never taught that it is an ordinary day like every other day.

Even in speaking about the last days, Jesus expected the Sabbath to be observed.  When he spoke about the time of great tribulation upon the earth, he said that His people would need to flee.  "But pray that your flight will not be in the winter, or on a Sabbath. For then there will be a great tribulation, such as has not occurred since the beginning of the world until now, nor ever will." (Mat 24:20-21).  It's clear from this passage that His heart was for His people to keep the Sabbath day holy until the very end of the age when He returns.

Moody and Wesley upheld the Sabbath
I recently read portions of two articles by famous preachers about keeping the Sabbath holy, which upheld this teaching.  One was by D.L. Moody and the other was by John Wesley. They were among the many Famous Christian Sabbath Observers that I have written about elsewhere. By the way, these famous preachers both believed that the Christian Sabbath is on Sunday, not Saturday, as I have covered in my article by that title (see here).

1. The first one is in "Baptized by Blazing Fire," Book 5 (p. 213-216).  This testimony is given by a pastor, who had attended the all night prayer meeting at the Lord's Church and read the book.  Gok Sung, Mok Sa dong Full Gospel Church - Testimony by brother Gong, Tek Mo:

"After a short time, an unexpected accident occurred to one of our church members. It was on February 18th, 2007, Sunday, a Korean new year. This member was a high school student who had just graduated and was about to enter his freshman college. This student was a drummer on the worship team and he also served as a Sunday school teacher. On the day of the accident, he had played drums on the worship team for the service on Sunday. After the service, I went to look for him to have lunch with him but I could not find him. When I asked another member if he knew the where abouts of the student, he replied and told me that he had left during the middle of the sermon. The student had left to attend a student gathering with the other former high school classmates. I was perplexed and could not believe what I was hearing. Before this accident had occurred, I was emphasizing to the congregation of the seriousness to live a Holy life. Even after I had read the fire books, I was now emphasizing it to a greater degree. I was emphatic about keeping Sundays Holy and Christians living according to the Word of God. This student had violated the Sunday and got drunk at the student gathering. He was killed from his injuries in a vehicle accident. The other students were seriously injured as well. Once I was informed of the accident, I rushed to the emergency room at National University Hospital. When I arrived in the emergency room, the doctor was performing mouth to mouth resuscitation. It looked hopeless. As I was thinking, I knew if he died right now he would end up in hell. I felt like the world was falling apart. I left the emergency room and earnestly prayed. 'Lord, this is my fault. I did not teach and nurture him correctly. I could not lead him to live a righteous Holy life.'"

"Even though I prayed and beseeched the Lord to give him another chance, the student eventually died. I was in much mental suffering from this episode. As I got into the car to return to church, the Lord opened the spiritual eyes of Deacon Cho. God showed the deacon the path of the student in which he was walking forward to."

Brother Gong, Tek Mo later testifies that individuals in his church visited hell in the spirit and the Lord made sure to show them this young man suffering their in torment: "In our all night prayer service, the Lord granted the church members to experience hell. Of all the experiences, the most painful to experience is to witness the student who was in the car accident. He was a brother who had church with us not too long ago. Now, when I see him tormented in the fiery flames of hell, I am in pain and frightened myself. I was thinking that I must live a faithful Christian life. Whenever I witness the scenes of hell, I am not able to sleep and usually lose my appetite."

"Deacon Cho works at a company. Ever since he witnessed the sight of the souls being tormented in hell, he fiercely clings on to his job. He is now constantly reminded of the souls tormented in hell. He tries to forget what he has seen by intently focusing on his job. He said that he can not stop thinking about how he must live a faithful Christian life. This is reminded to him through the student who is now experiencing misery in hell. This is the brother/student who had only worshiped and had service with him several days ago. The deacon then had to witness the student in hell more than ten times even after his previous visitations. Even now, when he visits hell, the Lord will show the student to the deacon. The Lord's intention was to reinforce to the church members that hell was a serious place of torment and that they should not come to hell. When the deacon hears the student, the student would ask, 'Deacon Cho, I am thirsty, please give me some water.' The deacon's heart is torn up. As I even journalize all this, I write with streams of tears running down my face."

2. The second testimony was posted on the website of The Lord's Church, by a lady who identifies herself as "Sammy Sam."  She states:

"My husband owns his business so he thought that success meant working 7 days a week. He would rush to church on Sundays.. rush back.. eat his meal in a rush and then rush to work until sometimes 10 or 11 pm... I prayed and begged him not to work on Sundays because I wanted to keep the Sabbath day holy. He took me for granted to say the least.....but I continued in prayer and fasting. One day his friend asked him to use his truck to help him with moving some heavy equipment, he went to the company as as soon as he was about to go through the gate the gate slammed shut without any one closing it... everyone was in awe and they said that that has never happened before. He then told his friend that he does not think that he should be here on Sunday working."

"He kept the Sabbath a few times but he then got a huge job promising him BIG money and that he could not refuse so he decided to work that Sunday and I went to church without my husband. That morning his truck would not start for some reason he rushed to the store to purchase the parts that he thought was the problem but upon changing the part he realised that the issue was not what he thought. He went back to the store bought different parts, which helped him move his truck and headed to work. As he was heading to work.... he was involved in a minor accident with a fire truck. The police was called to the scene; that earned him some demerit points.... blah... blah.. blah... NOW he does not venture out on a Sunday... goes to church comes home and attempts to keep the Sabbath holy to the best of his ability."

"GOD is not mean. He hears the cry of the righteous and heeds those cries. If we seek him diligently about the Sabbath which is so dear to his heart, then he will make ways for us to keep it holy. He is a just GOD. We may just need to spend some more time on our knees."

Putting it All Together
It's my hope that this post on the Lord's Day has helped you to see the importance of keeping it holy.  The fourth commandment has not been abolished.  Sabbath observance was not repealed by Jesus.  Rather He upheld it! He's the Lord of the Sabbath, and it is His holy day.  We are commanded to remember it and keep it holy until He returns.  While that may have become unpopular today and faded from common practice among Christians, famous preachers during the 18th and 19th centuries, like D.L. Moody and John Wesley certainly taught it.  The testimonies given here are a stark reminder that God will not be mocked.  That includes the observance of the Sabbath.

If you are a pastor, I recommend you diligently search the Scriptures, pray and ask the Lord for guidance, and then be led by the Spirit in obedience to the Word.  If you are not a pastor, then submit to your leaders and honor the day they designate for worship.

Author's note: I also recommend reading David Wilkerson's message, Honoring the Sabbath, which I discovered after writing this article, as well as Zipporah Mushala’s Second Testimony of Hell, in which she saw a man of God in hell for relying on His obedience to the Law to save him. If you enjoyed this post, you may also like my other posts in this blog available through the Home page, especially Resting from Work, Keeping Sundays Holy, Famous Christian Sabbath Observers, and Is Practical Righteousness a Lost Truth?  You can find more articles like this on the Home page for Working God's Way. You may also access a collection of my most popular blogs at "Writing for the Master."


Len Lacroix is the founder of Doulos Missions International.  He was based in Eastern Europe for four years, making disciples, as well as helping leaders to be more effective at making disciples who multiply, developing leaders who multiply, with the ultimate goal of planting churches that multiply. His ministry is now based in the United States with the same goal of helping fulfill the Great Commission. www.dmiworld.org.
Posted by Len at 7:26 AM