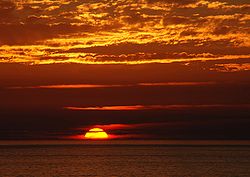 The Lord is saying that each new day begins in the evening, and continues through the night, the next morning and for 24 hours until the next day begins in the evening. So I realized for the first time that this is where the Jews got their understanding and why they begin the Sabbath in the evening at sunset.  This practice is not a Jewish cultural matter, but a divine matter that was established in the beginning by God Himself.

It’s very clear from Scripture that “the light He called day and the darkness He called night.” (Gen 1:5).  God later provided a means to govern both the day and the night.  “God made the two great lights, the greater light to govern the day, and the lesser light to govern the night; He made the stars also. God placed them in the expanse of the heavens to give light on the earth, and to govern the day and the night, and to separate the light from the darkness; and God saw that it was good.” (Gen 1:16-18).  As long as the sun is above the horizon, it is daytime.  This is why sundials were the ancient means of telling time, which is one way the sun governed the day.  But once the sun sets, it can no longer cast a shadow.  At that point, in days of old, they could no longer use the sundial to tell the time.  At that point, it was no longer day.

During the night, they used the moon and stars to track time, since these celestial bodies were given by God to govern the night.  This is why four watches referenced the time during the night.  There would always be watchmen on the wall, standing watch over each city.  The enemy could use the cover of darkness to attack while everyone was sleeping, so it was important to maintain a watchman on the wall.  During the twelve hours of night, there were four watches or shifts for the watchmen.  Just as in our modern military, the watchmen would rotate, taking turns standing guard for these periods.  So each watch would last three hours.

All of this helped me to understand more clearly what happened at the time of Jesus’ resurrection from the dead.  Scripture says, “When the Sabbath was over, Mary Magdalene, and Mary the mother of James, and Salome, bought spices, so that they might come and anoint Him. Very early on the first day of the week, they came to the tomb when the sun had risen.” (Mar 16:1-2).  In Matthew’s gospel it states: “Now after the Sabbath, as it began to dawn toward the first day of the week, Mary Magdalene and the other Mary came to look at the grave.” (Mat 28:1)

The Sabbath was from Friday evening until Saturday evening.  On Saturday evening when the Sabbath ended, perhaps this is when the ladies went to buy the spices.  Perhaps there were some markets that opened for business at that time, since everything had been closed for 24 hours.  In my opinion, it is more likely that some merchants opened for business in the evening, as soon as the Sabbath ended.  It is remotely possible that the ladies bought these spices very early in the morning at sunrise.  But it’s very unlikely that any markets would be open at that early hour.  It seems to me that on Saturday evening, as soon as the Sabbath ended at sunset, they bought the spices during the dusk period, and then the next morning, they went to the tomb very early at sunrise.  This was probably because they did not want to be entering a tomb in the dark of night, so they did not go there on Saturday evening. Women would not want to be roaming about the city in the dark.

After the Lord showed me when the Sabbath day begins, I decided to do a quick search online the following day to see what the Jews believe.  Amazingly the first answer I found stated: “The Torah describes creation, ‘And there was evening, and there was morning, one day.’ Thus, according to Judaism, a new day begins in the evening, at sunset. The Jewish Sabbath (Shabbat), like all Jewish days, begins at sunset.” This confirmed what the Lord showed me. Of course, as Christians, we are not seeking to adopt Jewish customs. I am not advocating Saturday Sabbaths that start on Friday evening and end on Saturday evening. I am simply saying that based on Scripture, long before the Law of Moses and before the Jews were a people, we learn from the account of creation that each day begins and ends at sunset. Moreover, as I have already written in another article, the Christian Sabbath is Sunday, not Saturday.

Six years after publishing this article, I read a book by Jonathan Edwards, the eighteenth century revivalist preacher, philosopher, and theologian, called A Faithful Narrative of the Surprising Work of God. In his book he stated, "It has never been our manner, to observe the evening that follows the Sabbath, but that which precedes it, as part of the holy time." This means that Edwards and his congregation celebrated the Lord's Day from sunset on Saturday evening to sunset on Sunday evening, which agrees with what the Lord showed me about the Sabbath period at the time I wrote this article in 2012.

In summary, the Sabbath day, like every day, begins at sunset (when the sun goes down) and ends twenty-four hours later at sunset. If you are not a pastor, then submit to your leaders and honor the day they designate for worship. If you are a pastor, I recommend you diligently search the Scriptures, pray and ask the Lord for guidance, and then be led by the Spirit in obedience to the Word.  You cannot rely on your obedience to the Law to save you, because it is only by grace that you are saved through faith (Eph 2:8-10).  And we can do nothing apart from the Lord Jesus (Jn 15:5), but if you keep His commandments, you will abide in His love (Jn 15:10).

Attribution notice: Most Scripture quotations taken from the NASB.

Author's note:  A pastor from South Korea, named Yong Doo Kim received a revelation from the Lord of the importance of Keeping Sundays Holy. He asked the Lord when this day begins and ends and the Lord told him it begins at midnight on Saturday night and ends at midnight Sunday night, which includes the twenty-four hour period of Sunday. I realize this is different from what I received when I prayed and read the Word, but I include it here for your consideration. I do not advise anyone to engage in any money-making or money-spending activities at all on the Lord's Day. If you enjoyed this post, you may also like the other posts in this blog available through the Home page. You may also access my complete blog directory at "Writing for the Master."


Len Lacroix is the founder of Doulos Missions International.  He was based in Eastern Europe for four years, making disciples, as well as helping leaders to be more effective at making disciples who multiply, developing leaders who multiply, with the ultimate goal of planting churches that multiply. His ministry is now based in the United States with the same goal of helping fulfill the Great Commission. www.dmiworld.org.
Posted by Len at 6:15 AM