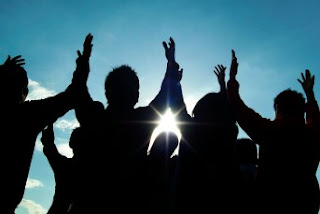 In my previous post called "Keeping Sundays Holy," I wrote about the revelation given by Jesus Christ to brother Yong-Doo Kim in 2005, regarding the need to keep Sundays holy. Yet I have spoken to people who say they see no such expression in the Bible about "keeping Sundays holy."

In Exodus 20:8 the fourth commandment is written to keep the Sabbath holy.  My friend, the fourth commandment has not been abolished.  In the New Testament, we celebrate the Sabbath on the first day of the week, because this is when Jesus was resurrected.  In Acts 20:7, we learn that the church met on the first day of the week to celebrate the Lord's Supper and listen to preaching.  In that instance, the apostle Paul preached all through evening until dawn the next day.  Meeting on Sundays has been the normal practice of the church since the resurrection.

But we should be very careful not to compromise this day.  It's the Lord's Day, and we should delight to honor the Lord all throughout that day. I want to share with you an excerpt from the book called "Baptized by Blazing Fire" by Yong Doo Kim.  In book 3, he writes about a fellow pastor friend of his who died after many years of diligent service to the Lord, and was shut out of heaven.  In this experience, he was shown many souls in hell, who had consistently attended church meetings and faithfully lived their lives, but they ended up in hell because of the errors of their pastor's teaching.  Many were in hell, because they did not "keep Sundays holy."  This was the expression used by the angels, not mine.  Here is the excerpt:

Sung Min general hospital is located in my neighborhood. Pastor Kim, Young Gun, had evangelized and ministered at this hospital. I had once admitted myself to Sung Min hospital. When I was a patient there, the pastor and I had greeted each other and became acquainted. I had sometimes invited him to my church to give a sermon as a guest speaker.

Pastor Kim, Young Gun once told me a story. He was in his early 60s. He had always evangelized at the hospitals. He was also well known for evangelizing on the streets. One day, he fell ill as his liver swelled. A lot of water filled his liver and stomach. More than that, he also had jaundice, an illness that colors the body yellow. He admitted himself to the hospital while he was evangelizing.

Pastor Kim, Young Gun was once dispatched to the Philippines on a missionary trip by his church. While he was on his mission trip in the Philippines, he had over-exerted himself and worked beyond his physical strengths. The pastor was very stressed by the pressure he received from his church. They wanted results and they called him frequently. “How many people have you evangelized? How many new registrants have you enjoined?” They utilized various tactics to pressure and interrogate him. The pressure and stress eventually overtook him and he had become physically ill. He died during treatment in Korea.

Pastor Kim, Young Gun explained the experience when his spirit/soul departed his body. He said when he breathed his last breath he experienced his spirit/soul separate from his physical body. In fact, his spirit/soul looked identical to his physical body. Pastor Kim, Young Gun was able to see the doctor use the defibrillator on his body. The doctors had attempted to resuscitate him several times with the defibrillator. With no result, the doctors confirmed his time of death and had covered his whole body and face with the white linen.

The Pastor’s family and relatives had come too late and were informed of his death once they had reached the hospital....his soul flew at great speed and arrived at the gate of heaven. The Pastor said that the gates of heaven consisted of twelve pearl gates and were a magnificent sight. The Pastor’s first impression was amazement: “Literally fantastic!”

As Pastor Kim, Young Gun attempted to enter the pearl gates of heaven, two angels standing guard gave him a stern, frightening look. The Pastor became very frightened and his heart was filled with fear. The two angels had a large sword at their side. They were very tall and he could not properly view all of them with one glance.

The angels asked the Pastor: “How dare you walk near the gate? Who are you? What is your title and what did you do when you were on earth?” The Pastor answered, “I had just died from an illness; my liver swelled. I was a Pastor and I worked as a missionary.” The angels demanded a ticket. “Very well, present your ticket of permission to enter heaven. Now!” I replied in shock. “What! You need a permission ticket to enter heaven? I had never heard of such thing! I do not have one.” One of the angels immediately replied: “What! What are you saying? How dare you walk toward the gate without a permission ticket!” As the angel rebuked me, the other angel kicked me like I was a soccer ball. In that moment, the Pastor thought he was kicked very far off. Then the same angel who had kicked him caught up to him and kicked him once more for a second time and even farther away.

The Pastor was suddenly kicked toward hell and was dangling at the edge of a cliff. The Pastor was able to observe the miserable sights of hell. As the Pastor dangled off the edge of the cliff, he pleaded for someone to save him. Then the angel pointed and said, “Look at those souls! Look very closely at those souls going to hell! All of those souls attended church and lived a faithful life but the errors of their Pastor’s teaching led them to hell! I am showing you this scene because you are also a Pastor who led a ministry. You cannot be forgiven for you have committed the same atrocity. They did not keep Sundays holy and did not properly keep their faith. They mocked God and believed according to what they wanted to believe and based their faith on what was in their minds.”

Within the moment Pastor Kim was about to be thrown in hell, two souls immediately came and earnestly grabbed hold of him. The Pastor found out later that the two souls were his relatives who were prayer warriors. Due to their earnest pleadings, the Lord had granted the Pastor an extension of seven more years to live. The Pastor received special grace. He had been given another chance and had escaped from being thrown into hell.

The Pastor came back down to earth to reunite with his dead body. When he came back, his relatives were still singing hymns....[at his funeral]

He had experienced a supernatural event. With the power of God, the Pastor had come back alive. Now, this is the seventh year and because of exhaustion and illness, he had relapsed once more. His liver had swelled up and the Pastor had to be admitted to intensive care. Pastor Kim, Young Gun earnestly appealed, “Pastor Kim, Yong-Doo, I was very proud of myself. Until now, I thought I had evangelized properly throughout my life and in faith. I later realized that I had done it all with my strength and passion instead with the guidance and help of the Holy Spirit. Please Pastor Kim, Yong-Doo, you must seek help from the Holy Spirit in every case. I want you to lead your ministry with the help and strength of the Holy Spirit.” Pastor Kim, Young Gun then asked me to sing many hymns that are powerful and strengthening. Joo-Eun, Sister Baek, Bong-Nyu, my wife, and I gathered around Pastor Kim, Young Gun. The Lord, Jesus, accompanied us as well. Jesus, the Holy Spirit, and the guardian angels watched and prepared to take the Pastor to heaven.

Today is Thursday and the Lord announced that He was going to take Pastor Kim, Young Gun to heaven soon. When Joo-Eun and Sister Baek, Bong- Nyu glanced up to heaven, the home of Pastor Kim was almost finished. The last thing was for the Pastor’s soul to arrive in heaven. His home was waiting. Pastor Kim, Young Gun and his wife were very joyous once they heard of that news.

[end of excerpt from Baptized by Blazing Fire book 3]

Putting it All Together
If you are a pastor, I recommend you diligently search the Scriptures, pray and ask the Lord for guidance, and then be led by the Spirit in obedience to the Word.  If you are not a pastor, then submit to your leaders and honor the day they designate for worship.

I hope this has served as a wake up call for you, if you have been lax about Sundays.  Please get with God and repent, if you have not properly kept Sundays holy.  If you have properly done so, then please do others a favor by sharing this testimony with them.  This is not an isolated incident.  Other pastors have also seen souls in hell for not keeping Sundays holy, and after reading this, we have no excuse for this sin.  Now is the time of God's favor.  Now is the day of salvation.

You cannot rely on your obedience to the Law to save you, because it is only by grace that you are saved through faith (Eph 2:8-10).  But don't receive God's grace in vain.  We were saved to be the righteousness of God.  If you know Him, you will keep His commands.  Always remember that we can do nothing apart from the Lord Jesus (Jn 15:5), and if you keep His commandments, you will abide in His love (Jn 15:10).

Author's Note: If you enjoyed this message, I also recommend reading David Wilkerson's message, Honoring the Sabbath, which I discovered after writing this article. You may also be interested in the other posts on this blog, available on the Home page, especially Resting from Work, Faith Works!, Christian Sabbath is Sunday, not Saturday, Is Practical Righteousness a Lost Truth?  and Pleasing the Lord. Please allow me to also recommend Restored Truth. I also invite you to visit my collection of blogs at Writing for the Master.

Len Lacroix is the founder of Doulos Missions International.  He was based in Eastern Europe for four years, making disciples, as well as helping leaders to be more effective at making disciples who multiply, developing leaders who multiply, with the ultimate goal of planting churches that multiply. His ministry is now based in the United States with the same goal of helping fulfill the Great Commission. www.dmiworld.org.
Posted by Len at 1:48 AM