The Ebb and Flow of Ministry for the Lord 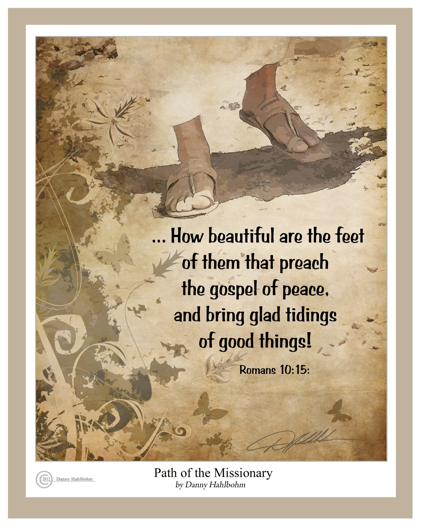 We have been based near Budapest, Hungary, serving as missionaries for nearly five years.  However, we are currently on furlough, away from the field, praying and seeking the Lord's guidance regarding where to be, and for the provision to fulfill the mission.

However, people today have various misconceptions about missionaries and some unbiblical expectations of them.  Some may expect that a missionary must stay on the field all the time and live in their host country permanently, as they did in the early days of missions during the nineteenth century.  Others may not see the need for missionary families to take time off the field.  Still others may look at a missionary’s role as if it were a job, which is very consistent and routine from week to week.  Yet in real life, a missionary’s ministry has a normal wax and wane.  Even Paul had an ebb and flow in his ministry, so it should not surprise us when missionaries experience this in their ministry.

There was a period of three years from his conversion until his departure from Damascus (Gal.1:18)

“And he left for Tarsus to look for Saul; and when he had found him, he brought him to Antioch. And for an entire year they met with the church and taught considerable numbers; and the disciples were first called Christians in Antioch.” (Act 11:25-26)

After their first missionary journey, Paul and Barnabas returned to Antioch and reported all that the Lord had done through them.  And they stayed there for a “long time,” which was probably a year or more.

“From there they sailed to Antioch, from which they had been commended to the grace of God for the work that they had accomplished. When they had arrived and gathered the church together, they began to report all things that God had done with them and how He had opened a door of faith to the Gentiles. And they spent a long time with the disciples.” (Act 14:26-28)

When Paul went to Corinth, he initially worked with Aquila and Priscilla as a tentmaker, and every Sabbath he reasoned in the synagogue, trying to evangelize Jews and Gentiles.  But once his team arrived, he devoted himself exclusively to preaching.

“After these things he left Athens and went to Corinth. And he found a Jew named Aquila, a native of Pontus, having recently come from Italy with his wife Priscilla, because Claudius had commanded all the Jews to leave Rome. He came to them, and because he was of the same trade, he stayed with them and they were working, for by trade they were tent-makers. And he was reasoning in the synagogue every Sabbath and trying to persuade Jews and Greeks. But when Silas and Timothy came down from Macedonia, Paul began devoting himself completely to the word, solemnly testifying to the Jews that Jesus was the Christ.” (Act 18:1-5)

So he had periods of heavy travel from one place to another, periods of secular employment when he mainly evangelized on weekends, and extended periods when he stayed in one city for over a year, teaching the Word of God, such as he did in Corinth.

“And he settled there a year and six months, teaching the word of God among them.” (Act 18:11)

That was in Corinth, and he did the same thing in Ephesus.

“It happened that while Apollos was at Corinth, Paul passed through the upper country and came to Ephesus, and found some disciples.” (Act 19:1) “And he entered the synagogue and continued speaking out boldly for three months, reasoning and persuading them about the kingdom of God. But when some were becoming hardened and disobedient, speaking evil of the Way before the people, he withdrew from them and took away the disciples, reasoning daily in the school of Tyrannus. This took place for two years, so that all who lived in Asia heard the word of the Lord, both Jews and Greeks.” (Act 19:8-10)

After his third missionary journey, he was imprisoned in Judea for 2 years.

“But after two years had passed, Felix was succeeded by Porcius Festus, and wishing to do the Jews a favor, Felix left Paul imprisoned.” (Act 24:27)

When he finally arrived in Rome, he was imprisoned there for 2 more years.

“And he stayed two full years in his own rented quarters and was welcoming all who came to him, preaching the kingdom of God and teaching concerning the Lord Jesus Christ with all openness, unhindered.” (Act 28:30-31)

There is Biblical and early church historical evidence to indicate that after his Roman imprisonment, Paul was released and traveled more, perhaps as long as four years, including a trip to Spain. (Clement of Rome in I Clement, and 2 Tim.) He later returned to Rome again, where he was eventually martyred in 64 A.D.

Putting it All Together
It’s evident that Paul’s life was a blend of periods when he stayed in one place, which sometimes lasted for years, and periods of travel abroad.  It included periods spent back at the sending Church.  Some journeys were made by choice and others were out of his control.  Even when the choice was his to make, he sometimes didn’t know where he was going next.

Paul wrote to the Corinthians, “Perhaps I will stay with you for a while, or even spend the winter, so that you can help me on my journey, wherever I go” (1 Co 16:16).

Likewise, when missionaries travel with their families overseas for several years, they need to have periods home on furlough, away from service on the field.  Often missionaries take furlough every year or two years for a period of months.  This is time for them to receive ministry from others, be refreshed, encouraged, share what God has done through them, and get fresh direction and support to continue their mission. Usually while they are on the field, they do not receive any pastoral care, so when they are home, it is important that the Church visit and care for them, before the time comes when they will go away overseas again for a period of time.

Therefore, from this study, we can see how the Spirit of God directed the apostle Paul’s life.  It’s like our Lord said, "The wind blows where it wishes and you hear the sound of it, but do not know where it comes from and where it is going; so is everyone who is born of the Spirit." (Joh 3:8)

There is a normal ebb and flow that happens in the ministry of a missionary.  It’s not a job that a missionary does for forty hours a week for fifty-two weeks a year.  It’s a ministry, and the Holy Spirit directs it, not man.

If someone had tried to draw conclusions about Paul’s missionary calling coming to an end during any of his long stays in one place, such as Antioch, Corinth, Ephesus, Judea, or Rome, they would have been badly mistaken.  Once the Lord calls a person by His grace to be an apostle (“sent one”), he is always an apostle.  It’s the same with any calling that one may have from the Lord.  “For God's gifts and his call are irrevocable” (Rom 11:29). Who he is in God doesn’t depend on his geographical location.

So I hope this has helped you to better understand the life of a missionary, so that you can better minister to them and support them.  Often missionaries have left everything to follow the call. That means they have sold their home, their earthly possessions, and they have left their professional careers, as well as their friends, family, and church, in order to obey the Great Commission.  They are not able to just jump back into their professions as if they had never left, so they still rely on support while they are off the field.

They are not machines, but human beings, who need time away from the field.  And when they do take State side furlough, it’s not time to drop your support of them, but rather to continue it and even look for additional ways to support them further, not only financially, but also in other areas you may not have been able to offer while they were overseas.  Take an interest in them, and invite them to come and share their testimonies.  When you do it for one of the least of these brethren, you do it for Jesus.

If you are a missionary who is currently experiencing a period of ebb, be encouraged, because it does not mean God is through with you.

Attribution notice: Most Scripture quotations taken from the NASB. The "Path of the Missionary" painting © 2012 Danny Hahlbohm, all rights reserved by the artist.

Author's note: I also recommend Opportunities to Serve the Body of Christ.  You can access the Main Directory for Working God's Way, or my complete blog directory at "Writing for the Master."


Len Lacroix is the founder of Doulos Missions International.  He was based in Eastern Europe for four years, making disciples, as well as helping leaders to be more effective at making disciples who multiply, developing leaders who multiply, with the ultimate goal of planting churches that multiply. His ministry is now based in the United States with the same goal of helping fulfill the Great Commission. www.dmiworld.org.
Posted by Len at 9:18 AM